First off, I take great comfort in the fact that this will not be read by anyone. Or at least, not for a long time. Sure at some future point once I actually start to produce something that people take notice of I imagine someone will get curious and want to look me up (and if that’s you then let me just say a quick “hey, thanks for stopping by”). But until then these words are kind of just whispers in the dark, marked for internal use only.

Which is handy because the second point of this blog post is a personal kick up the butt. Let’s not think too much about the anatomical logistics required to pull this kind of manoeuvre off (or that it took two goes for me to correctly spell manoeuvre), let’s just take the metaphor as read.

See it’s like this: I set out some years ago to live what I would describe as a creative life. And there have been times when I would say I have been living one. I’ve written or directed or produced or appeared in shows at the Melbourne International Comedy Festival and Melbourne Fringe Festival. I’ve worked on various short film projects. I’ve worked with high school students to create and put on plays that deal with the issues that affect them, as well as getting my Broadway on directing high school musicals (though not High School Musical). I am proud of all these things.

However, they haven’t been quite enough. Just like when you read through someone’s social media postings you get the edited highlights of their life, my reality is much more mundane. And worse, many of the projects and ideas that excite me or mean the most to me are the ones that still lie largely incomplete or unrealised.

Like all of us when we procrastinate, I have the usual array of excuses. As a teacher, I have the kind of job that I don’t leave behind when the day is done. I have a family (a partner, two stepdaughters and a newborn son). I also recently moved further away from where I work, meaning I spend about three hours a day in the car. These and other demands over the years have restricted and at times outright stopped my various creative pursuits. Often times I would find myself shaking my head, wistfully sighing and putting a project aside with a lament of “One Day.”

I’ve decided that doesn’t work for me anymore. Partly because of the obvious, that life is too short, and eventually “One Day” if left unattended in a loading zone for too long gets towed away to “Never”.

But it’s also because of a realisation: Restriction does not stop creativity. It hones and unleashes it.

When working on independent productions, the restriction is usually money. There’s never enough to get the best quality equipment or expertise on board. It’s forced us to be creative, getting more out of less, finding another way to tell the story without elaborate effects or fancy camera dollies or cranes.

When working in a high school setting, the restriction is usually experience. The kids don’t have the training or worldliness to completely understand and pull off a performance in the way that a professional cast might. It’s forced me to learn how to cast creatively, re-imagine scenes to play to kids’ strengths and ultimately led to much tighter and interesting finished products.

When writing, the restriction is usually the limits of form or genre or perhaps the limitations of historical events that a story is linked to. The challenge in creativity comes in making those work for you in such a way that a 14-line sonnet can say as much as a full-length novel or that a play set in one room can somehow feel like it is still a critical fulcrum in world-shaping events that are happening somewhere offstage. These are ongoing challenges, but I’ve relished each of them.

So if restrictions don’t actually restrict creativity (instead forcing creativity down new and more interesting pathways) then why should this be any different if the restriction in question is time?

That is the question I am going to attempt to answer as I start the quest to reclaim my creative self. Finding ways to use time more creatively and effectively within the time limitations of everyday life. I plan on blogging about it too, both in terms of what I’m working on as well as in terms of how I am finding ways to work with the time I am given. 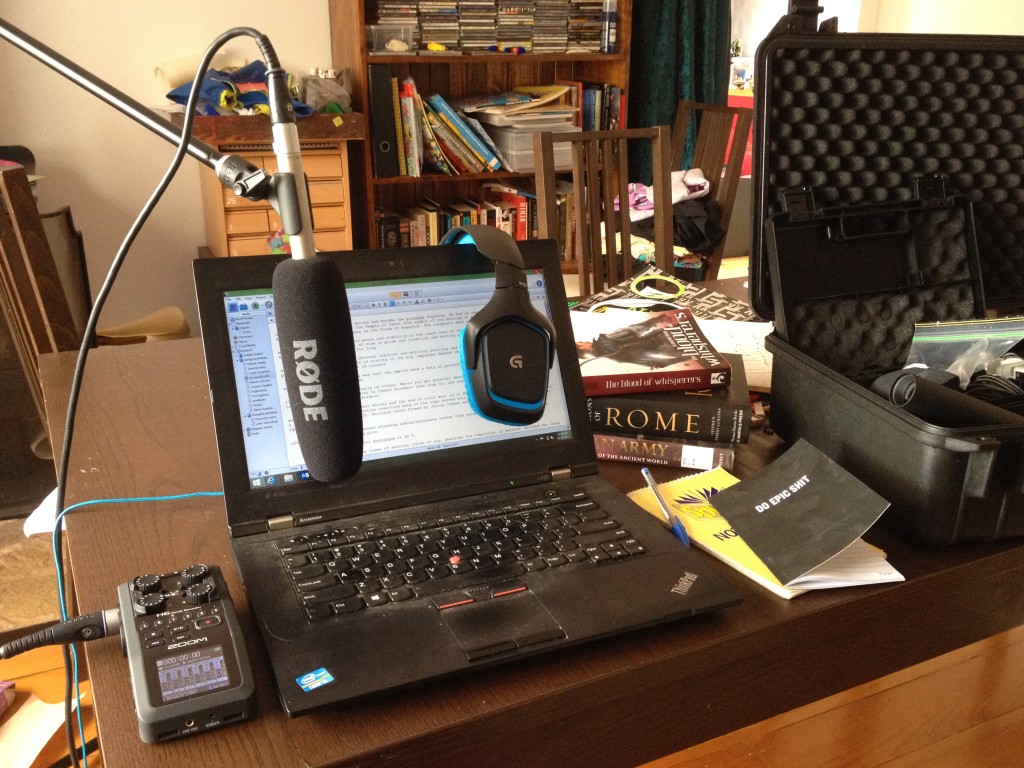 So what am I working on? Well at the moment there is a comedy web series that I am working towards and a military horror novel set in Roman times. Recently I’ve also been floating a fictional podcast idea and a new technical challenge in the form of performing and producing audiobook versions of my partner Devin Madson’s novels.

How will I go? You may already know the answer by the time you read this. But I’m going to be writing about it here whether you’re reading it or not. Think of it as motivation. Whispers in the dark, echoing my own thoughts back to me to keep me moving. For internal use only.